Reading over my last post, I feel kind of bad about publishing it under such a misleading headline. I’m going to blame winter illnesses and a brief moment of optimism that is pretty unique to my own online traffic. 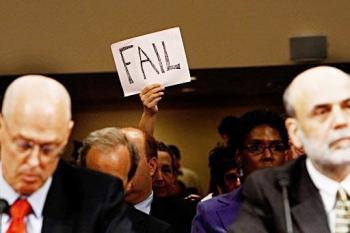 The root of this crisis is financial – its the natural inverse of the monetary expansion we enjoyed throughout the 1980s and 1990s and right up to mid 2006. The growth in the money supply was fueled exponentially by the willingness of consumers to take on new loans – and when money was created with the new loans, it was quickly leveraged into even larger bets on the equities and commodities markets.

The big bubble of money attached itself to several sectors before finally imploding from its own weight and emptiness: Foreign investment, Dot com mania, Flip that House mentality…

That sort of economic growth is imaginary – or at least temporary.

Despite the government’s rush to throw taxpayer money at the mess, the inevitable crash is finally just starting.

When workers run out of the ability to service new debt requirements, the music stops and everyone needs to find a chair. But there’s not enough chairs for everyone. Every time someone stops paying their mortgage or their credit card another chair vanishes. Thanks to leveraged investments and the fact the banking institutions themselves were using credit to expand their equity and commodity positions, it could mean ten or twenty chairs disappear.

(This deleveraging is just getting started and the losses are likely to pick up speed over the next six months or a year even if they’re covered over by more inflationary monetary and fiscal policy.)

If we look at mortgage resets as a hint to what may come, we can see that the future involves even more bankruptcies, foreclosures, and deleveraging. 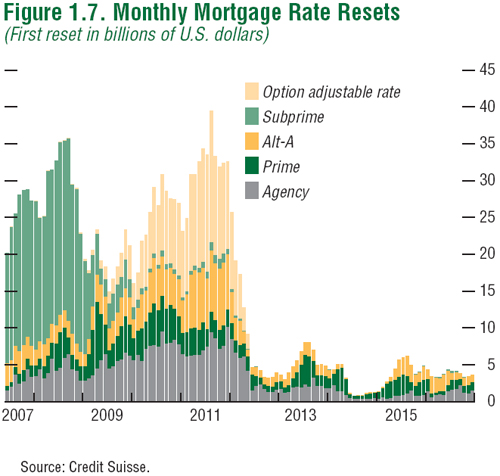 Over the next year, all of the government’s latest infusions of cash and “capital” into the financial markets are likely to fuel another round of inflation. On one hand it will look good to see stock prices recover somewhat, on the other hand prices for food and gasoline could be headed back up (and has anyone else noticed that food prices never came back down with the deflation?)

Of course, even that will require someone stepping in and buying up all the debt that the government is issueing on behalf of the taxpayers. Ironically, the crisis was sparked because those very taxpayers had no excess income with which to take on new loans…

So remember this, we’re closer to the beginning of the crisis than we are to the end. Obama can’t change this because the debt bubble is bigger than one president or decade – its a bill that’s been growing for generations.