Well the dust has settled on day one of public trading in Facebook stock, and it wasn’t exactly the great success or utter failure that some headlines would make it out to be.  There are some winners and some losers, but the most interesting thing might be just how much influence the biggest banks have bought from the internet’s biggest social website.

Going in to the initial public offering, there was one particularly obvious and glaring problem:  Facebook’s revenues simply don’t justify the asking price.  It didn’t make sense at $32 – $35, and it certainly didn’t after they inflated their target price to $38.

Let’s take a look at the one-day trading chart to make some sense of the market’s reaction to this offering: 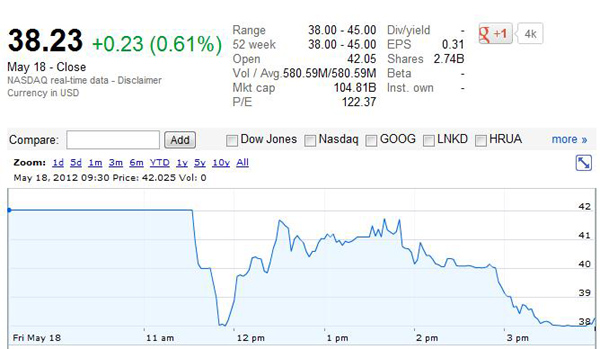 The first thing you’ll probably notice is that right out of the gate, it took just a few short minutes for the stock price to plummet down to exactly the $38 they had listed as a target price. But why did it stop there? Well more than likely, it was because the banks running the IPO were buying up shares on the open-market in order to support the price. Rueters is estimating that Morgan Stanley could have spent $2 billion in that fashion – just during the last hour of trading when the price basically flat-lined at $38.

So what does this tell us about the success or failure of this IPO?

The winners: Facebook employees and Mark Zuckerberg. There’s no doubt about it, this IPO made a whole lot of Facebook staff members in to very rich people. Even richer than they should be, if we’re being strict about valuations based on revenue & profitability.

The losers: Facebook users. Now that the company is in the hands of investors, there is going to be a whole lot of pressure to bring income up – and that means more aggressive advertising and/or sales of personal information. They’re going to need some very creative people to figure out how to double or triple Facebook’s current revenues, and that could end up relying on some particularly intrusive monetization strategies.

The unknown: Why exactly did the banks running the IPO feel that Facebook was worth so much? Obviously, they’d like to sell their shares at the highest price they can get, but why spend so much cash supporting the price and potentially leaving the loss on their books? One potential answer is that Morgan Stanley, Goldman Sachs, and J.P. Morgan aren’t too popular right now – but with influence over one of the web’s biggest new media outlets they might be able to use it for a nice PR campaign.

When you start considering the financial difference between new, stricter regulations versus continued bailouts, a few billion bucks on Facebook shares would just be a drop in the bucket…