It’s no secret or breaking news that the social aspect of the web is increasingly important to website success, but I want to talk a bit about specifics, and what this means for the future of SEO.

Evolution of the social web and social signals

Once upon a time, it was fairly easy to get good traffic and search rankings just from basic online social interaction:  blog comments and forum signatures gave powerful link signals and these platforms were the basis of most online social networks. However, with the proliferation of spam and poorly moderated websites, it became clear rather quickly that these link signals were a poor way to judge relevancy and authority.  Who is Bob3021, anyway?  And why is he linking to a page of new cars on a blog dedicated to web hosting?

Myspace, Facebook, and Twitter all helped to address these issues, but due to privacy settings and fees for large API calls, it wasn’t very useful for Google.

James Whittaker, a one-time Google executive, recently left the company and penned a now-infamous explanation of why he lost faith in the company:

Officially, Google declared that “sharing is broken on the web” and nothing but the full force of our collective minds around Google+ could fix it.

As it turned out, sharing was not broken. Sharing was working fine and dandy, Google just wasn’t part of it. People were sharing all around us and seemed quite happy. A user exodus from Facebook never materialized.

However, I’m starting to think that Whittaker’s protests are a bit premature. He claims that the mass exodus from Facebook never materialized, but how will things look a year or two after Facebook tries to appease institutional investors who bought in to an overpriced IPO? How long will users tolerate increasingly aggressive advertising? “This status update is brought to you by Bank of America!”

Google, on the other hand, doesn’t need to reinvent the network wheel – and it can afford to run a large social network without squeezing every penny possible from the users. Google+ could even afford to run at a loss, because its true value to Google is in the social signals it can provide to the search results – the true bread & butter product.

The potential future of Google Search: Ads, authors, and brands

Unless you’re one of the few who has switched over to Bing, you’ve probably noticed the arrival of author profiles – and their prominent placement – in Google’s organic search results. This trend won’t be going away, and if anything it will probably intensify over the next few years.

Google’s announced 3rd party commenting platform is just more evidence that they’re seeking a direct feed in to social signals, and I’ll bet good money that those commenter profiles will be linked to your Google+ and author profiles. When all of these things are combined, Google will actually have a damn good insight in to who has important things to say. Eventually, that is going to have a big impact on their search ranking – especially if they continue devaluing other types of links that have historically dominated in passing authority.

And even if Google author profiles aren’t directly influencing search rank (yet), they still provide a general advantage over other organic results because people like pictures. For one particular query that I’ve been ranking #1 for, I saw a 7% increase in click-through-rates after Google began to attach my author pic and profile to the result. 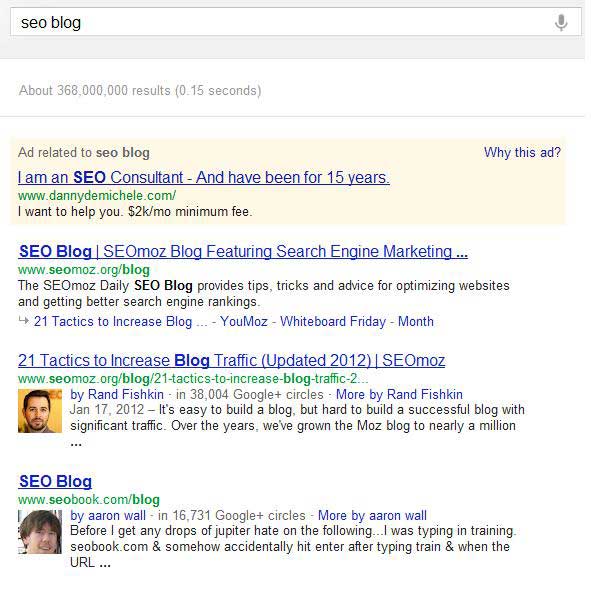 The real value of Google+

Google might not even need a mass exodus from Facebook. After all, relevancy and authority signals from social networks don’t really rely on whether or not you talked your grandmother in to signing on or whether you’re still in contact with your BFF from grade school. So long as Google can attract web publishers and professionals, they’ll get a very good idea of who is influential by looking at the size of networks, and whether or not the followers are relevant and influential in their own right. If a lot of important people care about what you have to say, well, you must be important as well! By that logic, the content you produce would be just as significant… and that means that this is one search trend you really can’t afford to ignore.