About two weeks ago, I posted this article about what happens when social media moderators are revealed to have their own marketing interests – but this specific example of the issue is far from resolved.

The marketer in question, Saydrah, managed to retain her moderator status in a few sub-reddits (they’re just kind of like categories that you can subscribe to or ignore, and then your front page is based on the categories you’ve selected.) Despite the constant heckling and the group of dedicated downvoters that seem to follow her everywhere they go, she just keeps on keeping on and apparently that includes trying to sneak in some links to the websites she’s been “outed” as being financially associated with: 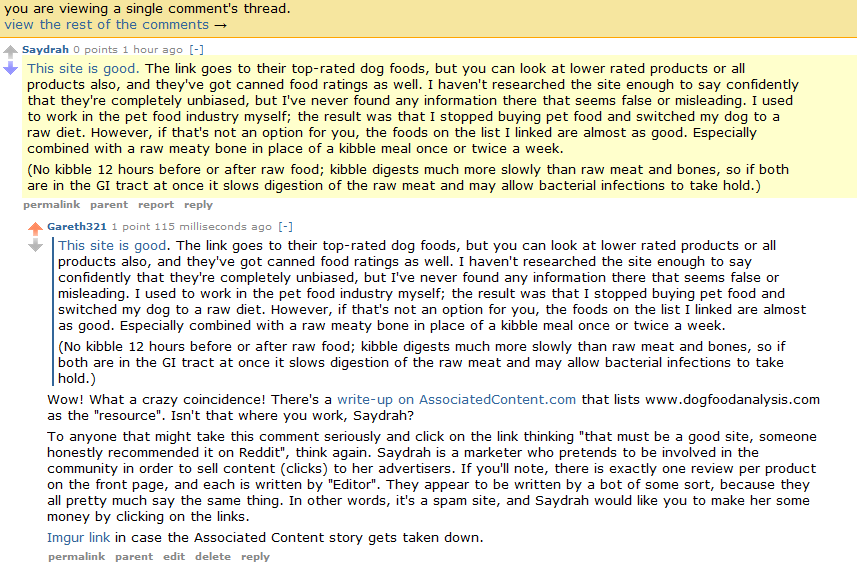 What’s interesting here isn’t just that people are still calling her out two weeks later, its that she was still moderating the subreddit that this exchange went down in!

Of course, as a moderator, she had the power to delete the comment criticizing her – and she did ban this comment as well as four others of a similar outlook. Unfortunately, while you can delete the current conversation, you can’t delete someone’s screencaps or memory of what they’ve written. So obviously, since you’re reading this, it became known that she was banning her critics (remember, this is the silent ban that makes user contribution’s invisible to the general public without ever actually informing them of their status as persona-non-gratis).

The founder of this particular subreddit saw the populist outrage against an out of control and self-interested mod, and over night he has finally removed Saydrah as an authority for that category. The people whose comments were banned are now restored.

So I can’t emphasize this enough: While moderating a social media website can deliver a great advantage when it comes to promoting your links to the top of the page, keeping this conflict of interests a secret or even blatantly abusing it is likely to create a massive backlash with fallout that can’t be measured in just days or weeks. We’re talking about a two or three year old account with hundreds of thousands of karma points – and whether its ethical or not that kind of profile takes a lot of time and patience to build up.

But the value in it? In this case, its just gone. Sure, the profile page is still a PR5, but what good is that when people come along and downvote everything until its nofollow? (Popular reddit links follow, unpopular ones are nofollow.)

Be warned, be careful, and always be honest! People understand that marketing is a part of free content that isn’t going to go away any time soon, but there’s nothing that humans hate than feeling like they’ve been tricked or deceived. Memories might be short, but public internet discussions are recorded for many years to come…