If you’ve been watching the news on internet censorship, you’ll know that China is far from being the only country that wants to control what its citizens and residents are able to access from the internet.

Of all places, it is Australia who is taking a lead in filtering the web and deciding what Australians are allowed to access.  I mentioned Australia’s filtering plans and their role for webmasters as legally accountable regulators last March and I was hoping that it would all go away by now, but despite a public outcry against the proposals they have been moving along toward implementation anyway. 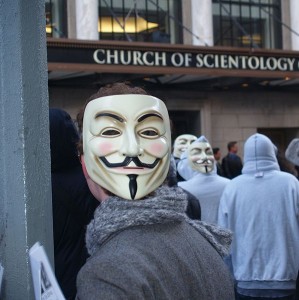 Now, if you’ve been around 4chan or a Scientology protest, you’ve probably heard of “Anonymous,” as well.  Its the internet’s equivalent to a masked gang of vigilantes, and  the (supposed) anonymity of the web seems to encourage more… drastic action than my simple blog posts.

In fact, some individuals claiming no association beyond Anonymous have taken credit for a recent wave of hacked websites belonging to the Australian government.

Through a series of DDOS attacks as well as auto-mated email blasts & a surge of time-wasting phone calls, Anonymous has managed to have a significant effect on the accessibility of Australian public services.  And this is all just in anticipation of the actual filtering software!

If an individual A creates and hosts content, and an individual B accesses and dowloads the content with consent intended, who is any third party to jump in and assume responsibility for preventing this transaction?

Americans may be relatively fanatic about free speech and individual rights, but the tradition of this proto-liberalism is part of the entire Anglo tradition from Canada to Australia to New York again.  The internet has embodied and globalized these values in a way that the drafters of the Magna Carta never could have dreamed of, and the fact is that those individuals who do care aren’t going to sit around while they lose freedoms they once enjoyed.

So will the Australian government listen up or back down?  Nah, probably not.  They know there’s a “moral majority” of puritanical luddites who aren’t particularly inconvenienced by the death of a free internet.  They weren’t online in the first place, and they probably weren’t looking up the content being marked for censorship.  That doesn’t mean its a good idea to ban anything that isn’t popular – or is only popular within a small niche community – but a lot of people are unfortunately unconcerned about liberty until they’re the ones being directly controlled.