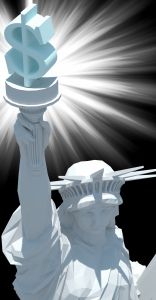 At some point, we became a bailout nation. Maybe it was the original Chrysler bailout in ’79-’80, maybe it was the Savings and Loan Bailout later in the ’80s. Whatever it was, the notion of bailouts has become an almost unquestioned part of our political “mainstream.” (At least for the politicians, of course.)

Carter, Reagan, Bush, they were all big fans of the bailout mentality – and Obama promises to keep that tradition alive. Its not a conservative thing or a liberal thing.

As long as you’re in the right industry, that is. The majority of voters are against the various forms of bailouts coming down the pipelines, and that’s likely because they’re the ones who will be left with the bill.

There’s a key phrase that gets kicked around a lot in discussing which companies are selected for bailout funding: “Too big to fail.”

The idea of course, is that a company grows so large that society itself can no longer exist properly without the corporation in question. While there’s some truth to the argument that one collapse could lead to another, it is fairly absurd to imagine that the loss of new Chevy cars would somehow lead to an existential crisis in American society.

A more realistic way to look at who gets bailout bucks is to follow the “political capital.” Its no secret that Republicans are friends of Wall Street or that Democrats exchange favors with unions. It is not so much about being “too big to fail,” it is also about being big and organized enough to donate to a political cause in a way that provides real value to the politicians – and that means more than money because quite frankly the politicians have enough cash already. They can always just take more or make more.

Republican rhetoric about property rights and business does more than guide their policies, it creates followers in the general public. Investors, tax payers, white collar workers can really get behind the message – even if it doesn’t have much to do with their eventual policies or even if they’re at a particularly small company that won’t get the benefits returned. Similarly with Democrats and unions: it catalyzes blue collar workers and makes “true believers” out of people who don’t have something directly to gain from the equation.

Sound too cynical to be true? So why is it that Republicans are always bailing out banks and the Democrats are the ones kissing the auto industry’s butt? Politicians look out for their supporters – if their supporters are “too big to be ignored.”

Everyone else. Perhaps we’ll call the members of this group “Too small to matter.”

The cost of the bailout may not be directly visible, but it is safe to say that if you aren’t getting a million-dollar check from the government you’ll be among those who are paying for it.

Taxes may go up, and that usually impacts online business owners in a bad way. As an independent business or freelancer, you’re subject to the full force of payroll taxes – a regressive tax that takes bigger chunks of income from people who actually make less money. If taxes do particularly target larger corporations, then they’ll be less generous with their advertising fees and affiliate commissions. If other workers don’t get their raise, they’ll spend less on consumer purchases.

If taxes don’t go up, prices will. We saw a hint of this over the summer with $4 gas and we’ve enjoyed a small break from that due to deflation of asset valuations and a flight to cash. Investors suddenly had to sell off huge amounts of their property at drastically reduced prices – since so many bills were due at once there was a sudden demand in dollars to pay those bills. When everyone is settled up, is anyone still going to want those dollars?

Even with the bailouts, and in part because of them, it seems like business activity is headed down in a hurry. There’s no free lunch, unless of course you’re signed up to one of the major political teams.