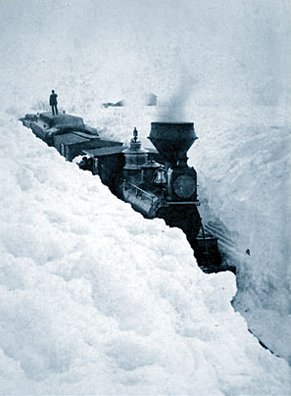 Businesses and customers alike are still in the process of cutting back.  Despite recent good news is housing, we have to remember that these numbers are being inflated heavily by short-term government subsidies that are soon to run out.   If the pattern from “cash for clunkers” holds for real estate, we could be seeing some record-low home sale statistics soon after the government spending program runs out of funds.

I hate to be a pessimist, but here’s the situation we’re looking at from a macro and political-economic point of view:

The trillions in bank bailouts hasn’t stopped 106 banks from failing this year.

The trillion in stimulus can’t seem to give money away, because they’ve only managed to spend $16 billion and create 30,000 jobs.  Well-intentioned or not, this was obviously something too large in scope for the bureaucracy to quickly implement enough to have the intended effect.

The Dow Jones Index is back near 10,000, but when you compare the value of dollars against other currencies or popularly traded commodities, it becomes clear that a huge chunk of value has been lost.  How much depends on who you ask, with estimates of a “real value” ranging from as high as 8600 or 6700 against Euros, but much much worse against oil or gold. 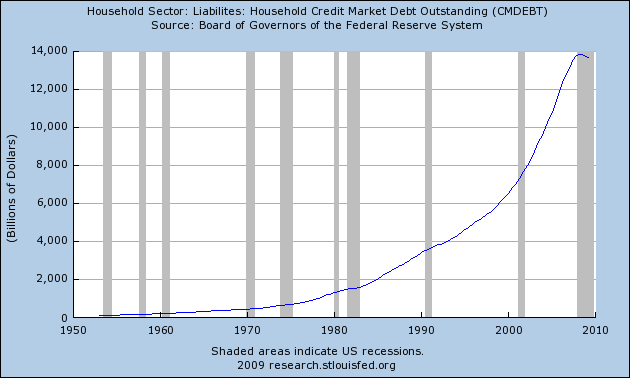 There’s the cold front:  All of that debt we’ve been taking on for the last 20 to 30 years.  And this isn’t just the debt the government took out in our name, this includes the debt individuals took out for personal consumption and all the debt businesses took out to expand, consolidate, and make executives stinking rich.

“Business as usual” for the last generation has actually been something quite unusual.  Such an extended acquisition of debt hasn’t happened in America for a long, long time.  Well, not since the depression that is: 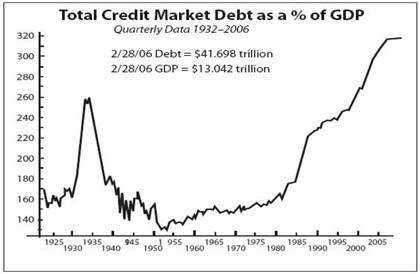 When you compare America’s total debts historically, and convert nominal dollar amounts to percents of GDP, you get the above graph.  Trust me, its not a coincidence that our last debt-bubble peaked out in 1929, on the eve of the great depression.

According to the first Federal Reserve chart, the debts finally began to unwind in 2008.  Until that is paid down to a level that households and businesses and investors feel more comfortable with, a significant part of national income will be diverted from new purchases and back toward paying off the old ones.

Obviously, this isn’t going to completely grind commerce to a halt, and its unlikely that we’ll experience many of the worst effects of the last depression – particularly the agricultural fiasco that was a nasty complement to the speculative crash.  We may not be hungry and covered in dust, but we’re still a long way from a warm & sunny forecast.

In a harsh winter, only the toughest can thrive – but that doesn’t mean its impossible.  What it means is that you might have to work twice as hard as you’re used to and you might have to get more pageviews than ever before just to break even.  Thats just not a reason to give up – its not like the market is overflowing with job offers.  Its more like a reason to get out there and start shoveling a path to where you want to be when that spring sun finally breaks through the clouds again.