Financial cheerleaders are heralding the return of box office popcorn sales, but the stock market has been trending down quickly as consumer income falls and credit continues to dry up.  Cars are selling well, but this is almost certainly temporary and driven by huge handouts and new loans. 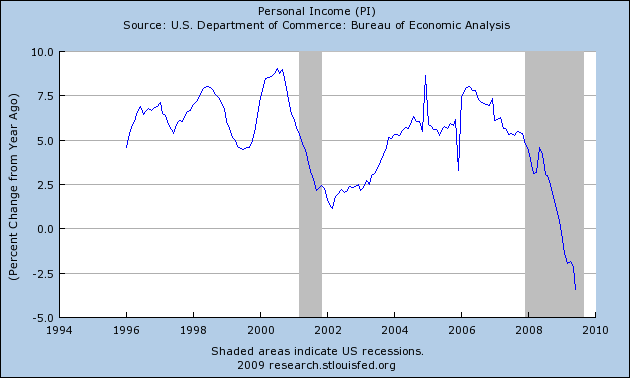 My outlook hasn’t changed much since may when I said to forget about all the talk concerning a quick economic recovery.  Academic and institutional economists insist that extra deficit spending can generate enough demand to reverse the downward momentum, but we’re really just kicking the can down the road of unsustainable debt accumulation.  This money could have been used to shut down insolvent financial institutions or buy up the actual troubled mortgages, but its mostly being handed out to those who are already well-off and well-connected.

As the cost of servicing the total debt grows, so proportionately do the opportunities available decline.  At some point very soon, the cost of taking on more debt will always be greater than the economic benefit that spent dollar generates.  Low interest rates and quantitative easing can delay the day or reckoning, but time is running out before the next wave of mortgage resets triggers a new bank run and financial panic.  At the very latest, this will happen in about a year or two as the next wave of mortgage resets hits a new all-time peak.  Another trillion in bad loans will go belly up soon, and this time they’ll be bringing the foreclosure signs to the upscale neighborhoods that filled up with half-million dollar plus balloon ARMs.

Of course, confidence is an important part of maintaining economic activity, and there’s no reason to panic and make things worse – but that doesn’t mean its time to start spending money you don’t have in the hopes that business will suddenly boom again.

So when will things actually get better?  Let’s take a look at the debt bubble behind this crash: 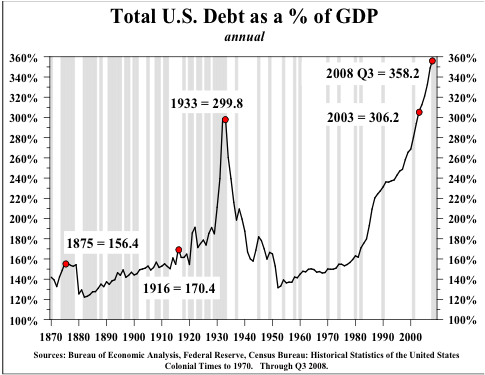 This chart compares debt to GDP, so inflation and devaluation of the dollar doesn’t explain away the fact that America is deeper in the hole than at the bottom of the Great Depression.

And that’s how you’ll find the bottom:  In 1933, unemployment peaked.  While the government continued to borrow, the broader economy was paying down its debts and a lot of debts that obviously could not be paid were written off the books as simple losses.  From there, total American debt crashed as credit became unavailable and banks fell out of favor.  One glaring difference, however, was that FDR had gold to seize – our government is trying to spend more debt.  Until the headlines are of debt loads falling, we can expect economic stagnation or even a slight decline.

Not all Debt is Created Equally

And debt isn’t always bad.  If you’ve got a killer business idea, you may very well need some credit to make ends meet while you launch.  Debt could spark the production of an project that attracts investor interest, and some capital-intensive business models practically demand available credit to even function.  As long as the value of the loan exceeds the amount you’re paying in interest, it makes perfect economic sense to borrow.  Finding a willing lender may be a little more difficult.

However, the way we’re borrowing as a matter of public policy isn’t going to yield long term dividends.  First of all, we spent a whole lot of billions over the last 12 months in handouts to failed banks.  Now we’re spending a few billion more to destroy running automobiles and spark false demand.  From an economic point of view, it would make a lot more sense to invest in research, infrastructure, or even social services like education and medicine.  Not spending anything at all would even help restore confidence and let people make their own decisions about what businesses to support.  Basically, we’ve set out on the least productive path of all and I’m not sure how these professional economists manage to keep a straight face. It probably helps to think about the yacht they’ll sail away on that weekend.