But at what point does it go too far?  One poster on Reddit shared what he felt when that line was crossed: 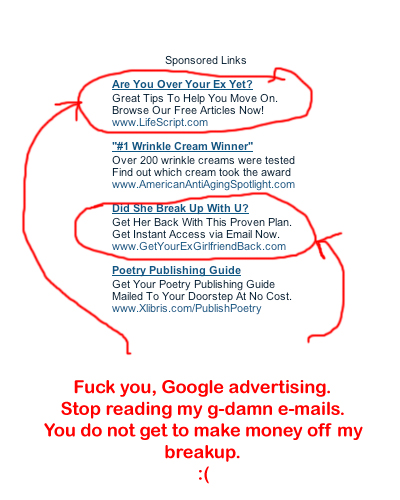 Now, Google might not have actually been “reading” his emails, but there are a lot of clues and information that can help automate the process of matching the ads.

Advertising has been around for a long time, and matching ads to certain demographics has been the major way to increase the efficiency of any time and money spent.  The internet has revolutionized this process of increasing ad efficiency, and the speed with which ads are being aligned with user interests & intent is accelerating.  No one particularly enjoys ads (unless its the Superbowl or some end-of-year special devoted to the most hilarious ones) but they’re more likely to tolerate and even act on the ones that present a product they’re in need of.

In the broadcast media (tv, radio) advertising demographics are primarily limited to income, age, and gender statistics based on surveys of listeners.  Some associations are just intuitive:  A sporting event is a good time to advertise sporting apparel;  A business show is a good place to advertise your new business software solution;  An action cartoon is probably a good vehicle to promote a new action-based video game.

The associations start off fairly broad and generalized – while it is more efficient than randomly assigning ads to content, audiences are still organized by overall tendencies.

The first way the internet revolutionized advertisement matching was the introduction of search.  Whether it was the commercial websites populating the search results or the paid advertisements posted alongside them, search advertising first allowed marketers to pay only for ads that were displayed by users who had requested them.  The promoter could agree to pay 25 cents or a dollar for every ad displayed to someone who asks about “tennis shoes.”  Rather than rely on aggregate tendancies and large volumes, such targeted contextual ads could deliver high conversion rates after being displayed just a few times.

Beyond search, there’s the content network of contextual advertising.  These are among the most common ads you’ll see when you’re surfing the web.

The next step beyond just the search phrase in the box or the words on the page:  it can store aggregated collections of pages, behavior choices, and more.  Cookies are starting to track exactly which ads you are most likely to click – and helping to build an audience profile that is as individually tailored as possible.  Obviously, this won’t sit well with some people who are concerned about privacy or particularly sensitive to the effects of an ad that is a little too on target. If this is how you feel about ultra-personalized ads, it may be a good time to check out Google’s advertising privacy policy to learn more about it!