Whether you’re building websites or just surfing the web, security and privacy are more important than ever. With advertising companies and hostile governments tracking down every move, many find comfort in the relative privacy and anonymity provided by VPN services. A VPN, or virtual private network, is an anonymized and encrypted tunnel you can route your traffic through. This will obscure your IP address from the sites you visit (they’ll only see the VPN’s IP) and it can even help you prevent your own ISP from tracking you and selling your info.

The most obvious case of why internet privacy matters is unfolding right now in Hong Kong. With China seeking to expand its influence in the city through the new National Security Law, all online and offline activities have been subject to strict – and often arbitrary – scrutiny. While a VPN only provides minimal protection against a totalitarian government with direct control over the internet, it’s still better than nothing.

On the other hand, most privacy concerns aren’t so life or death. People may also like to avoid personalized advertisements, or they just don’t like the idea that more than 200 advertising companies are trying to track them and build personal marketing profiles. You can try to opt out, but really, every week or two they seem to “lose” that request while continuing to build a larger ad file for you.

Some people may even prefer the customized ads to completely random ones. In that case, you might still benefit from a VPN if you’re trying to do link building and find your IP address rate limited or even worse – blacklisted. Since so many internet security layers are built around IP addresses, being able to switch them out can get you a lot more access than being stuck on the one that your ISP provides you.

A VPN just adds an additional step. Even before sending your data through the modem and ISP, it is encrypted before it leaves your local network. The encrypted request is routed through the modem and ISP – to the VPN. The VPN will be able to read the encrypted request and forward it along to whatever server your real destination was, and then that info follows a reversed path back to your computer. The only thing your ISP or anyone sniffing the traffic will see is a bunch of encrypted data.

Setting up NordVPN is surprisingly easy. Once you’ve registered and paid for your account, you’ll be prompted to download their connection management software. During installation, it will set up alternative protocols for your internet connection, and when you’ve activated the secured connection you’ll appear to be coming in from a new IP address.

In addition to data security and privacy promises, the most important factors in selecting a VPN are probably speed and reliability. NordVPN provides both, quite well.

My ISP has been struggling lately, so here are the best speeds I can get right without the VPN activated:

Activating the VPN connection does slow things down, but not by much. The biggest difference is the increased ping resulting from the extra hops required to encrypt and connect to the VPN. Once you’re connected, the sustained upload and download speeds are rather similar: 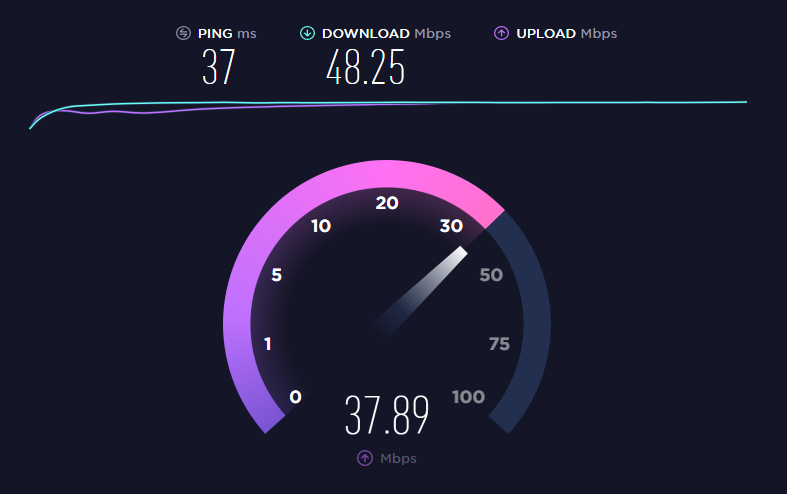 If you’re playing fast-action video games, the VPN might not help you out very much. For almost every other use case, however, you’ll barely even notice a difference in your internet connection when NordVPN is active.

The other great thing about NordVPN is that their prices are great – at least if you’re making a long term commitment. On the other hand, it’s pretty expensive if you’re buying it monthly.

As you can see, holding a monthly account for one year costs even more than signing up for the three year plan. Many times, such an extreme difference in prices can be a red flag, but NordVPN is pretty well-known and they’ve got a 30 day money-back guarantee. Just because you’ve signed up for a long term doesn’t mean you’re entirely stuck. You’ve at least got about a month to check it out and decide if it’s a service that’s going to help you out.

When it comes to privacy, Nord has one of the best reputations in the business. They claim that they don’t track, collect, or even store any logs of their users’ activities. Their company operates under the jurisdiction of Panama where there are no mandatory data retention laws. There was one leak of a private key, but it was caught internally before it was exploited – and as far as we know that’s the biggest security breach they’ve been associated with.

The most obvious advantage of a VPN is obfuscating your identity on the internet. This can be useful to avoid region-specific settings, access region-specific content, or just to cover your tracks. It can help you access services and sites you’ve been previously blocked from, and it can help prevent your data from being intercepted by malicious actors.

On the other hand, you might find that your new VPN-provided IP address has a bad reputation already. Not everyone uses these services for wholesome reasons, and there are plenty of users who are taking advantage of VPNs to spread spam or scrape private data. You’re also paying (at least $3.50 per month) to have a slower internet speed, so it’s definitely an option that requires a purpose. If you’re not sending sensitive information or you’re not particularly worried about privacy and anonymity, there might not be any advantage to the service for you.

But if privacy, security, and avoiding the surveillance of advertisers & governments is important to you, NordVPN is a no brainer.

Disclosure: I am a NordVPN customer – NOT an affiliate. I do not get paid to recommend this service: I just like it and wanted to share some info!