Have you been getting ready for the second financial panic?

As I pointed out last year, we seem to be in the relatively calm eye of a massive economic storm. All indications point to a repeat of 2008’s panic before too much longer, but how long will it be?  I can’t give you a specific date for the stock market sell-off, but there are definitely some macroeconomic dangers to be aware of in the near future.

Credit Inflation and the Cost of Doing Business

We’ve got a fundamental demand problem: Although the price of living and doing business has gone up, wages are more or less stuck. Productivity is way up too, but this isn’t translating to better wages either. So while banks and a few low-end companies thrive, workers across a wide range of industries have had to find ways to cut back. That means lower sales, and that means layoffs.. and before you know if there’s a massive deflationary spiral that could wreck our economy for a decade.

The solution, as far as the Federal Reserve has been concerned, is to re-inflate the economy with low interest rates, insurance against financial losses, and a generally easy monetary policy.  This has been a major factor in bringing prices back up to where they were before the last crash – but now comes the tricky part where they have to walk a fine line between what is growth and what is simply making business too expensive to be globally competitive. 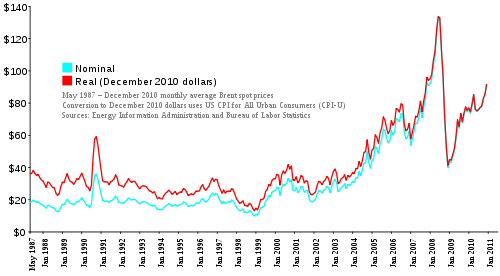 As you can see, this year has already introduced a new spike in oil prices.  Even worse, the price of Brent Crude oil has already shot up to more than $110 per barrel since this graph was charted out.  Of course, it doesn’t help that instability in the Middle East is putting additional pressure on supplies, but these record prices could be displayed in almost any commodity from grain to pork bellies to industrial metals. Everything is getting more expensive, and that is going to force more people and companies to start cutting back. Worst of all, gas prices aren’t expected to peak out on a seasonal basis until the end of summer.

So why is America having such a problem with high prices?  Well, not only have wages failed to keep up with the last round of reflation, we are relatively dependent on the price of commodities since we import a lot more than we mine domestically.  Eventually, when oil finds its way toward $4 a gallon and grocery bills hit a record high, people will start changing their economic decisions, again, in a way that triggers the next panic.

Foreclosures come back with vengeance

Oil and commodity prices aren’t the only economic factor setting up for a repeat of 2008.  Mortgage resets have been right back at the peaks that we had seen during the first big Wall Street panic of the century:

And while the first round was limited to relatively cheap subprime mortgages, this one will focus in on the Alt-As that were being used to push McMansions and other new development. The total value of loans is about the same, but ground zero will be in a slightly different neighborhood than many might expect. If anything, the home buyers in the upper income brackets are even more likely to walk away from upside down mortgages, so this particular wave of resets could be even more painful than the first.

There might be time left to jump for a few hedges against a lean economy, but if your business plan relies on continued economic growth after the summer, you might want to think of a back-up plan that can be implemented in a hurry!