The markets have priced in one of the steepest crashes in all of U.S. stock history. They’re not done.

Despite the swift drop we’ve already seen in equity prices, it’s still way too soon to call the bottom. In addition to the virus, several factors are coming together to create an economic crisis like we’ve never seen before. How nations and companies react to this pandemic is likely to have a large influence on what the economy looks like on the other side of this historic event.

Even without bad news to further tank the markets, stocks were already trading at questionable valuations. Historically, the mean and median prices of stocks are around 15.7-16.7 times annual earnings. Prior to the latest crash, stocks were trading above 30 – suggesting that prices were almost twice as high as they should’ve been.

Remember, that’s before we start calculating the first dollar of economic loss from the actual pandemic. 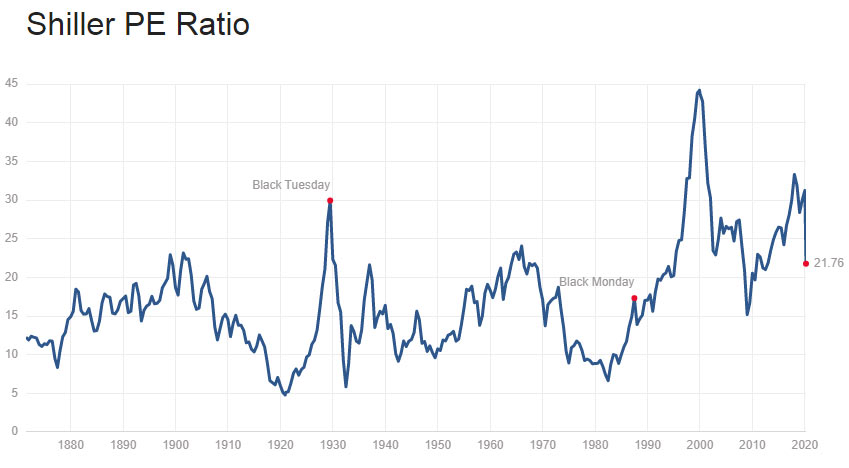 In some ways, we’re still unwinding the high equity prices that peaked in 2008 – and still haven’t made it back down to normal.

It’s also possible that we’ve entered an era with a “new normal.” As scary as it is to hear in economic analysis, it might be different this time. The nature of banking and investment has fundamentally changed, and low interest rates look like they’re here to stay for a while.

Investors have responded to the news of the virus by aggressively selling off stocks and moving in to government bonds. Demand for German bonds, in particular, has driven the interest rate on 10-years to negative .-3%. That’s right, to lend them money, you have to pay them for the privilege. Why would investors agree to such a deal? Well, losing .3% is much better than losing 30% or 50% in stocks, and if interest rates go even lower, the face value of today’s bonds will go up.

It’s not the type of speculation that investors usually line up for, but this isn’t the usual economy.

Stock market is falling faster than ever 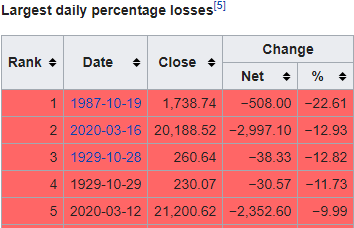 One thing you might notice from the above chart is that the current drop is almost vertical. Even compared to the historically significant drops in 1929 and 2008, the slope of our current trajectory is uniquely steep.

Part of this is because news and information can travel the world faster than ever before and people are reacting to news quicker.

And part of this is because we’re not just dealing with overpriced stocks and over-leveraged investors. We’ve also got an actual crisis that is materially reducing production and workers’ ability to spend.

As travel slows down within nations and between them, so too does the arrival of supplies and materials. Entire sections of the supply chain are breaking down and those factories that are still operational are switching their production to emergency supplies and equipment as fast as they can.

In many states and countries, factories that are producing non-essential goods are even being ordered to shut down to help contain and prevent the spread of the infection among workers. While this is often essential to stopping the virus from killing more people, it’s also putting many firms in to stasis – and that’s not necessarily a situation they can sustain on their balance sheets for long.

Unemployment is rising faster than ever

The measure that should really set off alarm bells is the change in unemployment. Almost instantly, millions of workers have been let go from their jobs. The entirety of the travel and tourism industry has effectively shut down – not just in the United States, but worldwide. At some point in the last week or two, virtually everyone who works in a restaurant, bar, hotel, museum, or theater has found their workplace shuttered and their jobs are either eliminated or on indefinite hold.

Some surveys have found that within the last week or so, as many as 9% of all workers have been laid off, and another 25% have been informed of reduced hours.

Weekly unemployment claim (estimates) are quite literally off the charts: 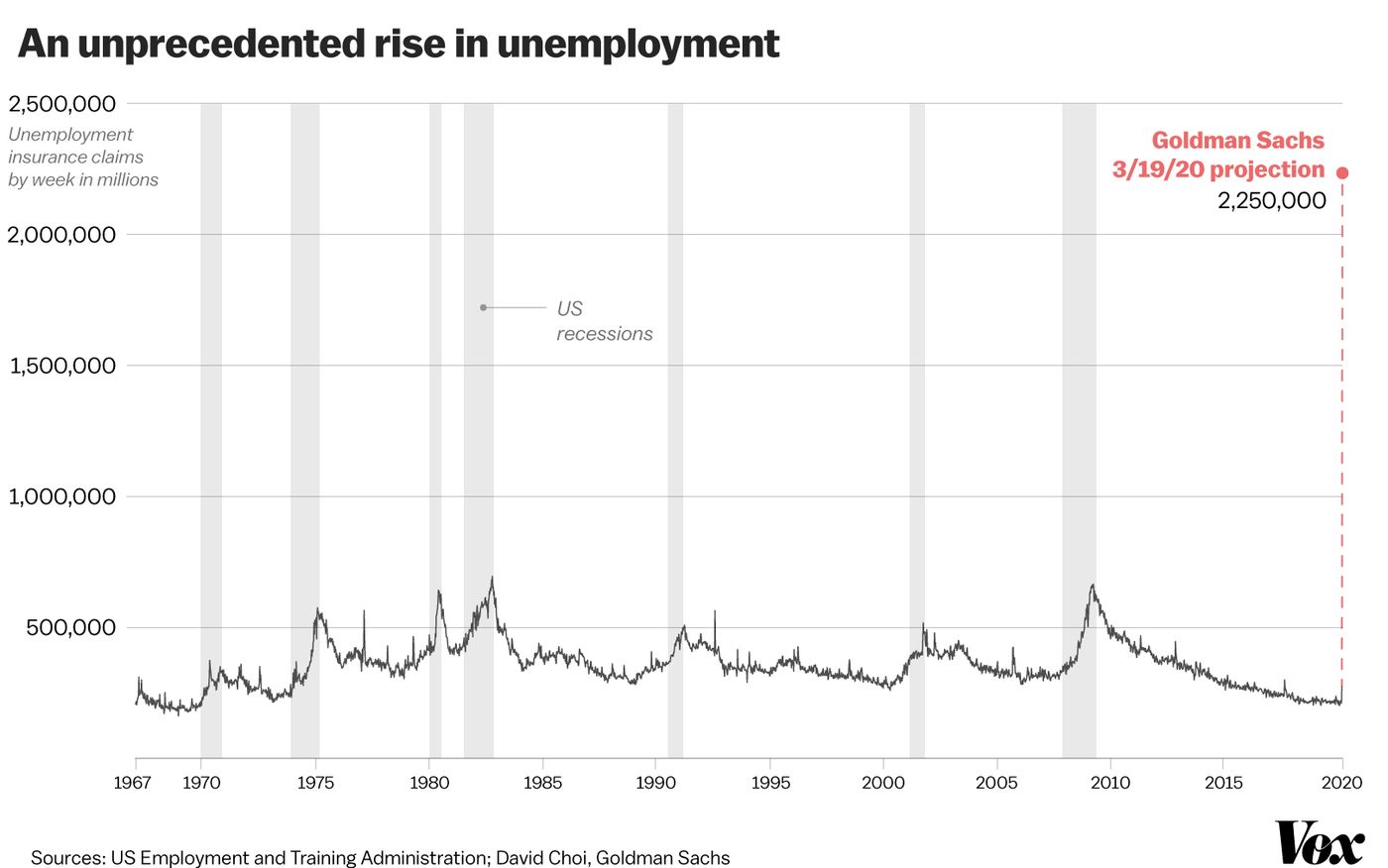 And that’s just the initial response. Those are just the jobs that are immediately impacted by social distancing and reduced public crowds. There are likely to be secondary effects, as well. Once the people who have lost work already start to miss payments and reduce spending, other businesses will start to suffer and see the need to reduce labor hours…

As with any sharp economic downturn, there’s a serious risk of feedback loops developing to reduce demand. This is just that much sharper and the underlying conditions causing the contraction might be with us for as long as 18 months.

Yes, 18 months. Even if we manage to successfully quarantine ourselves for long enough to stop the localized spread of the virus, we’ll still be subject to occasional outbreaks due to travel. The alternative will be to completely shut down all travel for the entire time instead, but that would have even more unimaginably disruptive economic consequences.

Think I’m being alarmist? Ask the president of the St. Louis Federal Reserve Bank. He’s saying unemployment could hit 30% in the second quarter of this year. If you thought 2020 was bad already, know that the worst is almost certainly on the way.

The resolution is entirely uncertain

China claims that they’ve contained the spread, but they’ve also implemented draconian protocols that we can barely start to imagine. Reports say that government workers will show up to your apartment each morning – in full hazmat suits – and provide a schedule of when (or if!) each resident is allowed to leave and what they’re allowed to do. At every street corner there’s a checkpoint with more government workers scanning peoples’ temperatures. Anyone found above the normal 98 degrees is immediately taken to a fever clinic where they can be quarantined until test results confirm their infection status. Household members of those testing positive are also then brought to quarantine facilities.

Any attempt to implement such a regimented quarantine in the United States would face… tactical difficulties. Given the liberal values of freedom and individualism that are so deeply ingrained in our culture, Americans would be less likely to comply and more likely to resist any attempts to force their behaviors.

Politically, we also lack the appetite to mobilize that many people and resources all at once. We did it in World War 2, but not only was that a very different situation, we were also a very different country ruled by a very different kind of president. In 2020, we’ve spent decades worshiping that belief in individualism, and we’ve modeled our social and economic systems in the ways that serve neoliberal idealism.

A new global order is forming

Yup. This is probably bigger than you think.

Our entire conception of economic and social strength is being challenged and the conclusions at the end of 2021 will look very different from the assumptions we went in to 2020 with. Governments are deficit spending at a pace they can barely keep track of, and central banks are burying that debt without a whiff of inflation.

It turns out that, in the face of an actual emergency, numbers and accounting tricks don’t matter so much as actual behavioral choices and the output that delivers.

All the dollars and all the incentives don’t seem to be changing those fundamental behaviors in a way that will sufficiently curb the spread of this illness. Hospitals are already feeling overwhelmed in many cities, and we’ve probably got another week or two before the rate of new cases even starts to slow down. It could be months – or even years – after that when we can finally and conclusively say what the long term economic effects of this pandemic were.

One thing that’s clear is that we won’t be going back to any sort of “normal” that existed in the past.