There’s an interesting question posed at a site called “SocialMediaRockstar.com” (and it only took me a month to respond!)

They’re basically asking a question of identity in the social media – are you a social media rockstar or a self-absorbed narcissist? I thought about the typical behavior of rockstars and had to ask myself at first if there was a difference! 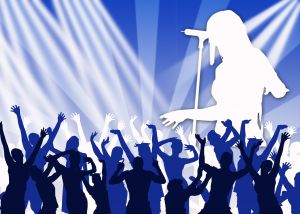 While social media is less hierarchical than other forms of mass media, human society is still a model of competition and a fight to reach the top. If there is no hierarchy, motivated and talented people will go out and create one.

Naturally, no spot at the top is safe – and especially with social media, people can question whether or not an individual deserves the status afforded by the hierarchy they’ve created. In this article, I don’t think Brett Borders is necessarily arguing that all hierarchy is wrong, rather that it should be left to open-ended competition that values quality of contribution over hype and the cult of personality. Sounds great – but we are still talking about people here.

Self-promotion for its own sake is still a skill that brings in wealth – in fact a lot of rockstars in the music world are really a lot better at talking themselves up than they are at performing their music. Any quick glance at a Top 40 chart will sort of prove this point – rockstars with musical talent “like totally” went out with the ’90s.

When I logged on the internet back in the olden dial-up days, anonymity was the standard. In fact, the experts of that day often warned that revealing your true identity could result in disastrous consequences. In a few cases, it has.

Then again, one should not be surprised that this newfound anonymity and identity paranoia led to some sort of a super-hero / super-villain complex. Trolls, rockstars, narcissists, white knights, evil masterminds – all of the comic book archetypes came out to play.

We may ask: Is all anonymity bad? Probably not. Batman had a brand or reputation that he had to maintain, even if no one knew he was also Bruce Wayne.

Yet even though the “good guys” may want to be anonymous too, this just isn’t the way the web is going. Freely giving out your real online name was unthinkable ten years ago, but today it is often an intentional point of branding and opportunity for networking & career advancement. While I’m personally a big fan of the anonymous internet, I also realize time isn’t going to turn back.

Somewhere, down some off-ramp of the internet superhighway, you might pull in to one of my little websites in your quest to find some knowledge. Repeat customers are rare but valued – most of the people who pass by are merely on their way to some other destination and there’s a high chance they won’t come back.

Maybe I’ll make a sale when you pull in the parking lot, but chances are you just need some directions – some information. This information is free and gladly shared at my little digital gas stations.

Oh, could I interest you in some hosting to get your next website plan to its destination? Oh well, maybe next time. I’m not really hunting for customers, the sign out front brings in enough. Maybe someday I’ll save up for a bigger, brighter sign to post out on the Google freeway.

If I’m hanging out in forums and social networking communities, I almost see them as my working-man’s pub – a place to sit with a good drink and find a good conversation at the end of the busy day.

Even better if I can sit back and watch the rock stars light up the stage.